I decided to officially archive this blog on the day my DPhil was confirmed. But I have waited for the electronic publication of my thesis, Interrogating Archaeological Ethics in Conflict Zones: Cultural Heritage Work in Cyprus, to announce the archiving. From now on, I will blog at Conflict Antiquities.

Read more »
Posted by samarkeolog at 1:05 pm No comments: 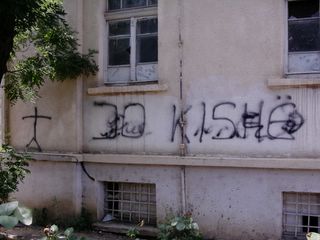 I had originally written that:

This writing is on a wall facing the Cathedral Church of Christ the Saviour, which was unfinished when the 1998-1999 war began and which has been attacked repeatedly since; its ruins are protected - in theory and in practice - but it remains a focus for Albanian nationalist aggression.

Although I got the literal translation of the graffiti correct, it appears I got the interpretation of the site and the meaning very wrong. Anonymous, Kosovar and Bytycci have all corrected me. According to them, the graffiti protested against the proposed demolition of the school for its replacement with a cathedral.

this writing is not facing a church and there are no church remaints - the church never started to be built in that site. this building is a school and people have problems haveing their schools demolished and replaced with religious builings. it is not a fucus of 'albanian nationalist aggression', it is a focus of people trying to save Prishtina's little remaining heritage, part of which is this old school building.

(Another anonymous commenter corrected my reading of the "no church" graffiti elsewhere.)

Man, you are either plain stupid and don't kno about it or you're really dumb and actually like it! I was disgusted with your Kosovo/a posys! About 89% of your photo comments were wrong; you got translations wrong, history wrong and context wrong in almost verything.[...] 'Jo Kishe' grafitti has nothing to do with the Serb Church. It protests the plans to demolish the school where it was written, in order to build a Catholic cathedral.[...]

Now, if you don't know shit, it's OK, you may learn. But not knowing shit and pretending that you do, that's STUPID!!! You're disinforming people here! And what about all the terrorist labeling and such? You have an agenda or what? Shame on you...

p.s. If you really didn't know, your friend wasn't suggesting, but correctly translated the 'K'qyre Punen Tone [mind your own business]!!!' graffitti. However, have it as a suggestion from me!

This doesnt have to do with the Church in front of it. This is written in opposition to the plans to destroy this school and build a catholic cathedral instead.

Patently, I didn't know shit, but it wasn't for want of trying; I didn't know that there had been any moves to demolish this school to replace it with a cathedral. I read this graffiti in relation to what I knew about the Cathedral Church of Christ the Saviour and although it may have been a mistake, it was a genuine mistake.

As I remember it, over the road is the university library and, on the same site, is the Cathedral Church of Christ the Saviour; it would be correct to say that it is not directly opposite, but locals do describe it as being "by the library"; Bytycci commented that the graffiti didn't have to do with "the church in front of it", but they may have been referring to the cathedral that the graffiti was protesting against or they may have been using my description so that I and others knew what they were referring to, so I wouldn't want to claim that Bytycci agreed with my understanding of the relationships between the buildings.
Posted by samarkeolog at 5:33 am 3 comments: 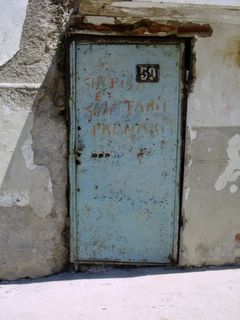 "Sht[e]pija e Shqiptarit pronarit [This house is Albanian-owned]": this writing was only a few doors down from the last.
Posted by samarkeolog at 5:15 am No comments: 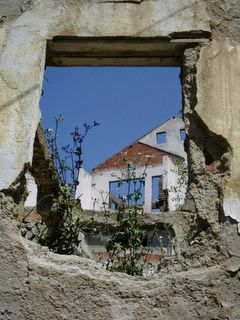 Prishtine buildings 31c
Posted by samarkeolog at 5:14 am No comments: 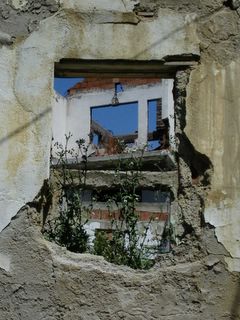 Prishtine buildings 31b
Posted by samarkeolog at 5:13 am No comments: 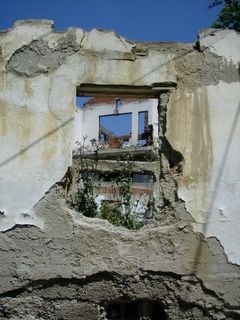 Prishtine buildings 31a
Posted by samarkeolog at 5:12 am No comments: 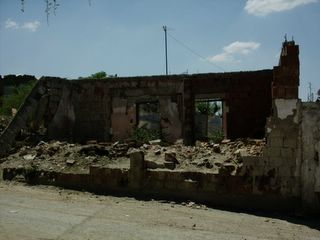 I cannot say whether this destruction was caused by Serb nationalists in 1999 or Albanian nationalists in 2000; it should also be noted that, in at least one case, I was informed by locals that the deterioration of the building was a product of neglect, rather than of violence.
Posted by samarkeolog at 5:11 am 2 comments:

samarkeolog
Academic background and more about me.

This work by Sam Hardy / samarkeolog is licensed under a Creative Commons Attribution-Non-Commercial-Share Alike 2.0 UK: England & Wales License.
Permissions beyond the scope of this license may be available in my academic disclaimer.